R$ 72 Billion in Biological Assets in Only 1.2% of Brazilian Territory

R$ 72 Billion in Biological Assets in Only 1.2% of Brazilian Territory

On June 28, 2018, Posted by publicar , In Articles, By área plantada,ATIVOS BIOLÓGICOS,eucalipto,fundos,Fundos de Investimento,Pinus , With No Comments

The forest-based sector currently has about 10 million hectares of planted forests, mostly composed of the genus Pine and Eucalyptus (area equivalent to the State of Pernambuco – around 1.2% of Brazilian territory). These planted forests are used as raw material in the production process of different industrial segments, such as pulp, sawnwood and plywood, wooden panels, steel, agribusiness, among others.

Based on CONSUFOR’s latest survey, these forest assets, not including land value and improvements, amount to approximately R$ 72 billion, a value comparable to the sum of the market value of the two largest companies in the pulp sector (Suzano and Fibria), which together sums about R$ 82 billion.

In an analysis of the distribution of biological asset value at the regional level (Figure 1), the South region holds about 55% of the total value (R$ 39 billion). In this region are concentrated the largest forest masses of the Pine genus, which in turn, have a management with longer cycles, usually above 15 years. The main objective of this long term management is to obtain logs with higher added value (large diameter logs) and, consequently, with better marketing prices. The Eucalyptus genus can also be managed for larger cycles in this region, but it is less common.

The Southeast region holds about 25% of the total value (R$ 18 billion). This is a region that has predominantly Eucalyptus plantations, where the State of Minas Gerais being responsible for 24% of the planted area of Eucalyptus in Brazil.

The most common management of Eucalyptus forests is short cycles, averaging from 5 to 8 years until clear-cutting. In general, the main consumer market for Eucalyptus wood is pulp, wooden panels and steel (charcoal) companies, where the main requirement is the volume of logs that can be processed (smaller diameters) and not necessarily higher value-added logs (larger diameters). This is an important factor that justifies the relation of area and value between the genera Eucalyptus and Pine, in which the genus Eucalyptus needs 3x more area in relation to the genus Pine, representing 51% of the total value of the biological assets (Figure 2). 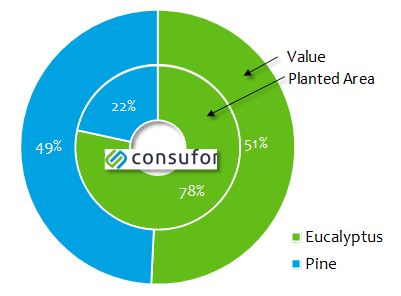 The comparative analysis of the regions in the last two years shows that one of the main factors that affected the value of the assets was the wood price (Figure 3).

A clear example of this impact is the South region (representing more than 50% of the total value), which, despite a -2% reduction in its total planted area, increased by + 12% in terms of final value. In other regions it was not different, wood prices directly influence the final value of the biological assets.

What contributed to this variation of + 12% in the South? In general terms, the market conditions related to the variations of wood prices. Despite the -2% drop in the planted area, the increase in the prices of wood of the largest assortments (higher value added) contributes considerably to this result.

The Central-West region had an inverse impact, an increase of 8% in its planted area and a devaluation of the assets in the order of -6%. This negative change in value is directly related to the region’s wood prices. These, in turn, have also been gradually reduced by the lower dependence of the companies for wood market, considering that the forests of the big companies of the region are reaching the age of cut. In addition, the increase in the wood supply in the region has also contributed to wood prices’ fall.

In order to allow the reader a better understanding of the representativeness of the main players within the forest sector in relation to the total value (R$ 72 billion), CONSUFOR ranked the 30 largest players in the sector based on their financial statements.

The Top 5 (Fibria, Suzano, Klabin, CMPC and Eldorado) represent about 24% of the total value in biological assets in Brazil (R$ 17.2 Billion) with approximately 1.6 million hectares planted (Figure 4). The appreciation of the Top 5 biological assets was around 43% in the last 4 years, well above to the Top 20 increase, with only 36%.

FIGURE 4 – Evolution of the Value of Biological Assets – Main Companies 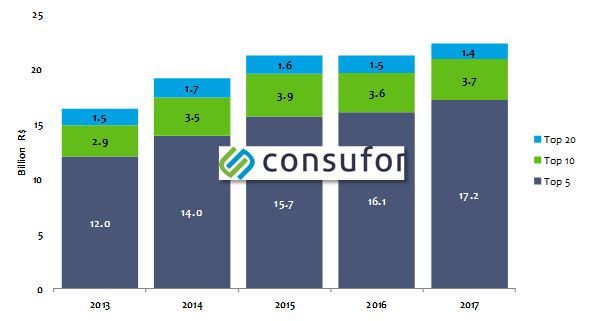 The recent merger between Suzano and Fibria, still under analysis by the responsible agencies, creates a new global leader in the production of pulp with a production capacity of about 11 million tons / year. According to the accounting statement for 2017, together, companies represent for about 51% of the total value of biological assets of the Top 5 and more than 1 million hectares planted. In a brief comparison of planted area, add up to 5x more planted area than the second one (Klabin).

The 10 million hectares planted with Eucalyptus and Pine forests comprise different producers: small, medium and large producers. Forest producers are divided into two main categories: independent – when forest production is not associated with self-supply, that is, it can be managed to the market to supply any industry, and, the integrated ones – when the industry is linked to the forest, that is, the production is mainly intended for self-supply.

Regarding biological asset values, independent producers account for about 15% of the total value. Within this category, there is a subcategory called TIMO’s (Timberland Investment Management Organization) and / or Investment Funds.

The funds already account for about 8% of the total value of biological assets and approximately 50% of the value of the biological assets of independent producers, a considerable part of the value. However, this participation of investment funds in the ownership of biological assets could be much greater if there were no legal restrictions on the purchase of land by foreigners. This is a legal restriction from the 1970s (revised in 2010), which has eventually been discussed some times by several governments, but without any positive opinion of changes for foreign investors.

The R$ 5.7 billion in biological assets of investment funds (without considering the value of land) are concentrated in the Pine genus (62% of the value). However, when it comes to planted area, 68% of the total is composed of the genus Eucalyptus (Figure 5).

With the restrictions imposed by Brazilian legislation on the purchase of land by foreigners, a common practice in the market is the purchase of the forest with the future land restitution or even the partnership with Brazilian companies in the acquisition of lands or lands + forests. Despite the country’s economic instability, the foreign investor is still holding firm in the forest-based sector. One of the factors that corroborate this decision is the size of the forest cycle, of at least 5-6 years, that is, despite the short-term oscillations, the forest-based sector is little affected because it is long term based.

The participation of investment funds in the total amount of biological assets in Brazil may seem insignificant, but when strategically well located, they become fundamental in the supply of different industrial segments. The concentration of investments in Eucalyptus in the Central-West and Southeast regions, which together account for more than 50% of the value, is explained in part by the strategy of supplying the pulp companies in these regions (Figure 6).

In general, not only the funds, as the other forest producers (independent and / or integrated) have sought investment opportunities in the Pine genus in the South, in part due to the great concentration of consumer segments, as well as its excellent climatic adaptation.

Based on the dynamics of growth of biological assets (increase of planted area and development of high productivity genetic material), regional market conditions (wood prices and consumer market), possible investments in progress, the expansions already carried out and some projected expansions by large pulp mills, it is not difficult to project biological asset values to 2021 higher than R$ 100 billion!